Music from the Stars - How would a star-sound-machine work?

In my fictional setting, part of the civilization has a strong astronomical alignment. Religion and Science are hard to distinguish and new scientific discoveries strengthen it´s faith in the heavenly bodies. Photography has not yet been invented, so besides hand drawings, my civilizaton uses musical patterns as a method of recording and displaying astronomical movements and events. Instead of churches or temples, people use observatories to exercise their religion. And instead of an organ or such to accompanie liturgy (entirety of Christian and Jewish ceremonies and rites) , priests are dedicated to “program” a gigantic instrument, in order to display all (or as many as possible) visible celestial bodies and effects, each with a tone.

So there's a constant sounded backdrop in the observatory/church/temple constantly changing it´s sound patterns, abruptly or in small nuances. Long serving sound-priests develop such a fine hearing, that they can recognize how the nocturnal sky currently looks like, just be listening to the music. For the purpose of celebrating important but bygone astronomical events (e.g. supernovae, comets, planetary alignments), the star-sound-machine can somehow recap archived music sections or the machine can be reprogrammed by a sound priest.

Musica universalis or music of the spheres is an invention already made in pythagorean ages, but is not to be taken literally as audible music: “The Music of the Spheres incorporates the metaphysical principle that mathematical relationships express qualities or "tones" of energy which manifest in numbers, visual angles, shapes and sounds – all connected within a pattern of proportion.” A lot of references can be found in ancient, classical and modern music, but as far as I know, none took the approach literally and consists of REAL Music composed by the stars.

What it should accomplish and general conditions:

Each pipe plays a single, continuous note. The pipes are arranged such that nearby objects in the sky are represented by pipes near each other; they are uncovered when they are visible at night and covered when they go below the horizon. The notes are arranged so that there is a sort of continuity between nearby pipes. The brighter the object (in general), the louder the note.

Here is how I imagine this would look: 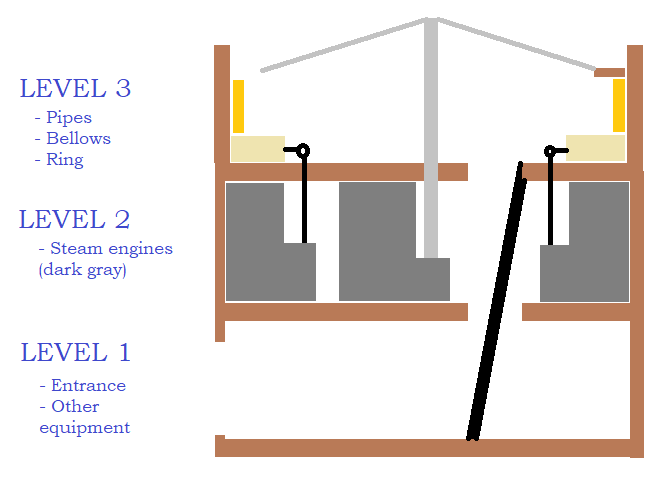 Here, you have the ground floor. This has auxiliary equipment, hopefully a small catalog filled with celestial data and calculations, sky maps, etc., as well as a helpful ladder to get to the higher floors.

This contains the bulk of the machinery: Steam engines. The ones on the sides each power 1-5 pipes (maybe more). The black lines and circles represent a crude drawing of gears and shafts to make pistons on the third level more in an out.

This contains the pipes (in orange) as well as the bellows. The bellows release air into the pipes as the pistons move in and out; the flow should be continuous. The small brown rectangles show that one of the two pipes shown is covered, while the other is not. The light gray thing is the structural supports for the ring; the central shaft rotates, moving the ring with it.

As promised, here is a better visualization of the ring - which is sort of like a mute. At any time, it is covering half of them, blocking the sounds from them. The exposed pipes represent the stars in the sky.

The ring rotates, slowly uncovering and covering pipes as time goes by and the planet rotates. Here is what it looks like, from the top: 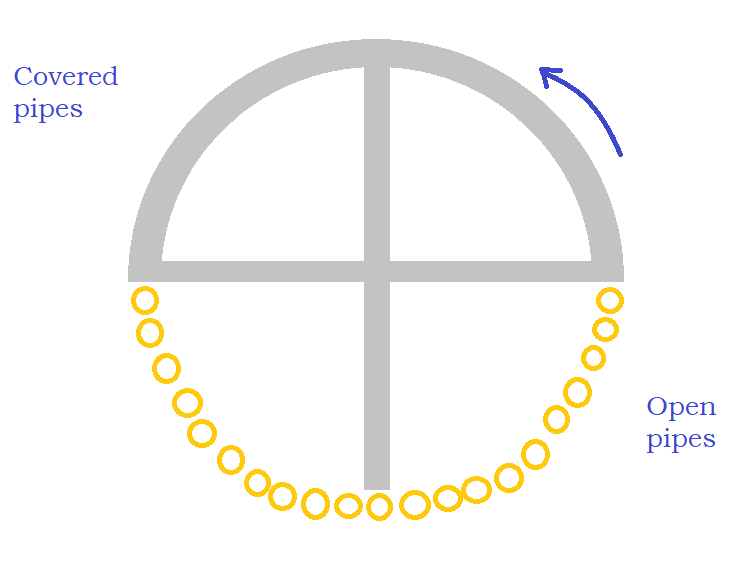 I believe this idea satisfies all of the requirements. It's automated and completely mechanical; humans will need to stoke the fires, but that can be done when an object is not visible. The ring may actually need to be made into multiple rings if different objects move at different speeds across the celestial sphere, but that can be done without too much trouble.

How to make a sound

A speaker works on the principles of magnetism. An electric signal is applied to a coil suspended inside a permanent magnet (basically, a piece of iron). As the current varies, the coil vibrates. The coils is then attached to a cone so that the vibrations it creates propagate through the air as sound. Alternately, the vibrating coil can be placed next to a tuning fork or chime so that the vibration chimes the tuning fork; or even something as simple as striking a piano string.

The simplest antenna works by intercepting a radio wave in the air. In general, a straight line antenna that is half the length of the radio waves will have a current induced in it by those waves. This current can then be directed to a speaker to make some noise.

There are plenty. Of particular interest are magnetically active gas giants like Jupiter, and main sequence radio stars, although these are evidently very rare (as in, less than 1 in a million main-sequence stars). Still, rare doesn't mean impossible. Also, there is the phenomenon of an astrophysical maser, which, while usually microwave, can be a radio emission form a stellar atmosphere.

For primitive equipment, you will need large radio sources. Here are two options.

How to make music

The signals received by the antenna can be split and sent through a (large) set of band pass filters. Thus each frequency band will then send its signal to the appropriate chime which with then sound at a certain frequency. This will make a sound in the same way a pipe organ does, with one sound making instrument for each frequency.

Since the bandpass filter at a certain radio frequency is connected to a sound-making instrument at certain audio frequency, there are a large number of combinations of ways to convert cosmic radio signals into music. The priests could have spend millenia finding the perfect combinations.

Meeting all the criteria

There seems to be a fairly obvious, and easy, implementation for this.

Let me introduce you to a player piano; 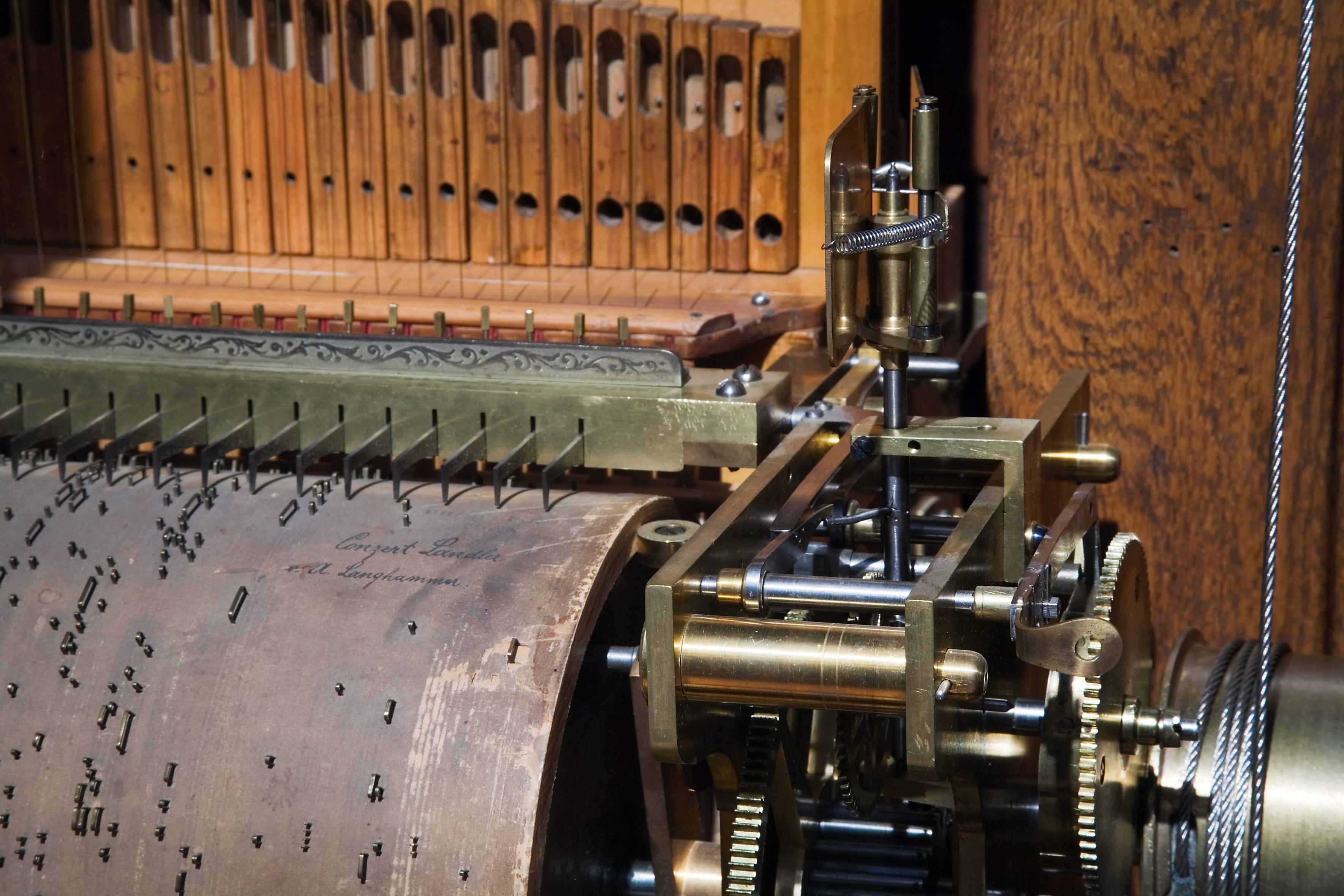 It's an automatic machine that plays a piano based on a preprogrammed tune recorded on paper or metal rolls. It's also how most musical boxes work.

To use it to make music from the stars the priests / scientists would make star charts that were actually tunes (this could perhaps even happen automatically to make sure any one off or unusual celestial phenomenon were captured) for the device.

The rolls probably wouldn't look exactly like the sky they represent, as the stars might need to be distorted to fit the rows properly, but they would probably be recognisable at least.
You would probably have a number of different rolls representing different periods of celestial objects, some might run faster than others or run constantly at a set speed and rhythm because they never / hardly ever change.

To make it more 'musical' the priests would tune the notes the stars played to make it more harmonic (so in a traditional piano the notes are arranged in some kind of logical scale, but in this case they would be moved around so the star charts made more pleasing noise). The separate rolls and periods of the sky could also hit different notes, so by separating them to multiple instruments you can make it more pleasing to listen to.

All the rolls (metal or paper, whichever was used) would be archived and could easily be played again when desired, copied if needed or transported to other locations.

The major problem is one of amplification. How can we get a very small signal (electromagnetic/light) and convert it into kinetic energy in the ranges that a person can hear? Essentially we have to build a microphone -> amplifier -> speaker system, and that's no small task for a primitive society.

So, microphone (ok, macrophone) first. What is coming from the sun that people can detect? Light mostly, but also heat. It is hard to get light to manipulate a (macro) physical system, but heat can make things move. So perhaps we can build a big array of bimetallic strips - they will bend when light falls on them. The reaction time is pretty low though (i.e. music will be constant for minutes at a time). With the aid of a big lens, you could make a 2d array of bimetallic strips that 'photographs' the sky into mechanical motion. Maybe with colored filters you could capture more (e.g. sunsets), or with extreme sensitivity you could perhaps get stars (rather doubtful), but even without them you would be able to get an input that varies with time of day, weather, and season.

Now you need to amplify it, as bimetallic strips aren't made for lots of pushing power. Maybe the bimetallic strips could manipulate valves that control air pressure (if you have a pressure source), or maybe regulate water flow. For this stage you do need an input of mechanical energy - heat from a fire driving a steam boiler, a waterwheel pushing bellows.

Finally we need to convert our amplified 'photograph' of the sky into sound. Humans know lots of way of making sounds. Air through pipes (organ), air over strings (Aeolian harp), drops of water hitting metal plates, the sky is your limit. I'd suggest air over strings, as it is a nice analog and somewhat ghostly sound.

Not the answer you're looking for? Browse other questions tagged astronomy religion music machine-cult or ask your own question.

12
How can my accidental time travelers determine the year using star/stars?
4
Is it possible to make a organ-size piano?
2
How to use sound to replace signage
6
Radiation from binary star systems and how that would affect a planet orbiting both stars
10
How would seasons work on a moon orbiting a gas giant orbiting a star?
16
Does harmony have to be invented?
10
Magic for tone-deaf people in a world where magic is performed through song
4
Could a language based on absolute pitch develop music?
4
What would it look like from the ground if a rogue star approached Earth?