How would a Biological Cannon work?

So I have a species of creatures who want to design a cannon using biological processes. Here are some things the cannon needs to do:

Well, we know killer whales can definitely toss heavy seals a long ways (https://www.youtube.com/watch?v=G7WGIH35JBE), but that's a bit out of the scope of the question. The creatures are on land, and if they can carry 1000 kg, they are big.

Could a natural gunpowder or equivalent be made? The bombardier beetle is one example of something that can generate two chemicals, and mix them on demand. From Wikipedia, "The spray is produced from a reaction between two chemical compounds, hydroquinone and hydrogen peroxide, which are stored in two reservoirs in the beetle's abdomen." Our comrades over at Biology tell us the maximum pressure inside BTW:

It's kind of low, so you'd get those elements separately (or from two different creatures, which is safer and easier). If you could find other creatures that had this capability, you could milk them in some fashion, so that brings the biological bit forward.

For the cannon, you need to have something that can handle the stress of combustion or whatever pressure is driving this. In theory, if you had a cored out tree trunk that was massive, you might be able to handle that sort of pressure.

What is the pressure? Firearms folks know a bit:

They assume average pressure is about 1/4 of the peak pressure. For an iron projectile (assuming a sphere), 7.8x that of water, that's about a 3" diameter shot. From the equation that the gun folks use, peak pressure of 3000 psi, with a 24" barrel gets you into the 500 m/s range.

Bamboo might be used (ala Captain Kirk in episode with the Gorn), but Mythbusters has already busted that idea, but that's for a single bit of bamboo. Looking at mechanical properties of bamboo, tensile strength is 2000 kN/cm^2, vs 35000 kN/cm^2 for steel, about 1/15th.

If you make a piece of wood thick enough, you might be able to handle the stresses of whatever your propellant is.

For large enough thicknesses of wood, you might be able to pull this off. Got to do some additional math to check this out.

If the cannon is to be fed food, and produce the required reaction, then some sort of dual creature setup might work. One creature (or creatures) on one side of the cannon excretes compound A; another secretes compound B. When mixed, they ignite, or they become far more volatile. The problem with this is that biologically, you would be asking a creature to excrete something with high caloric/energy value, unless this can be justified for another evolutionary reason.

As far as ignition goes, this discussion talks about some possibilities:

Can hydrochloric acid and digestive enzymes cause a fire?

Could plants spread their seed to other planets?

They can go along the path of Ecballium, and genetically engineer it. 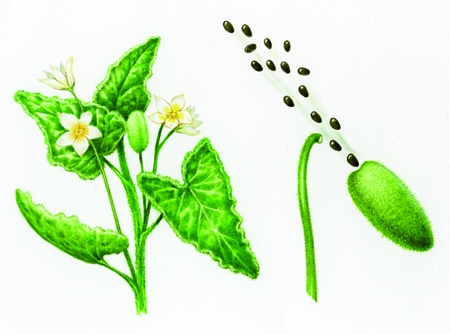 It gets its unusual name from the fact that, when ripe, it squirts a stream of mucilaginous liquid containing its seeds, which can be seen with the naked eye. It is thus considered to have rapid plant movement. 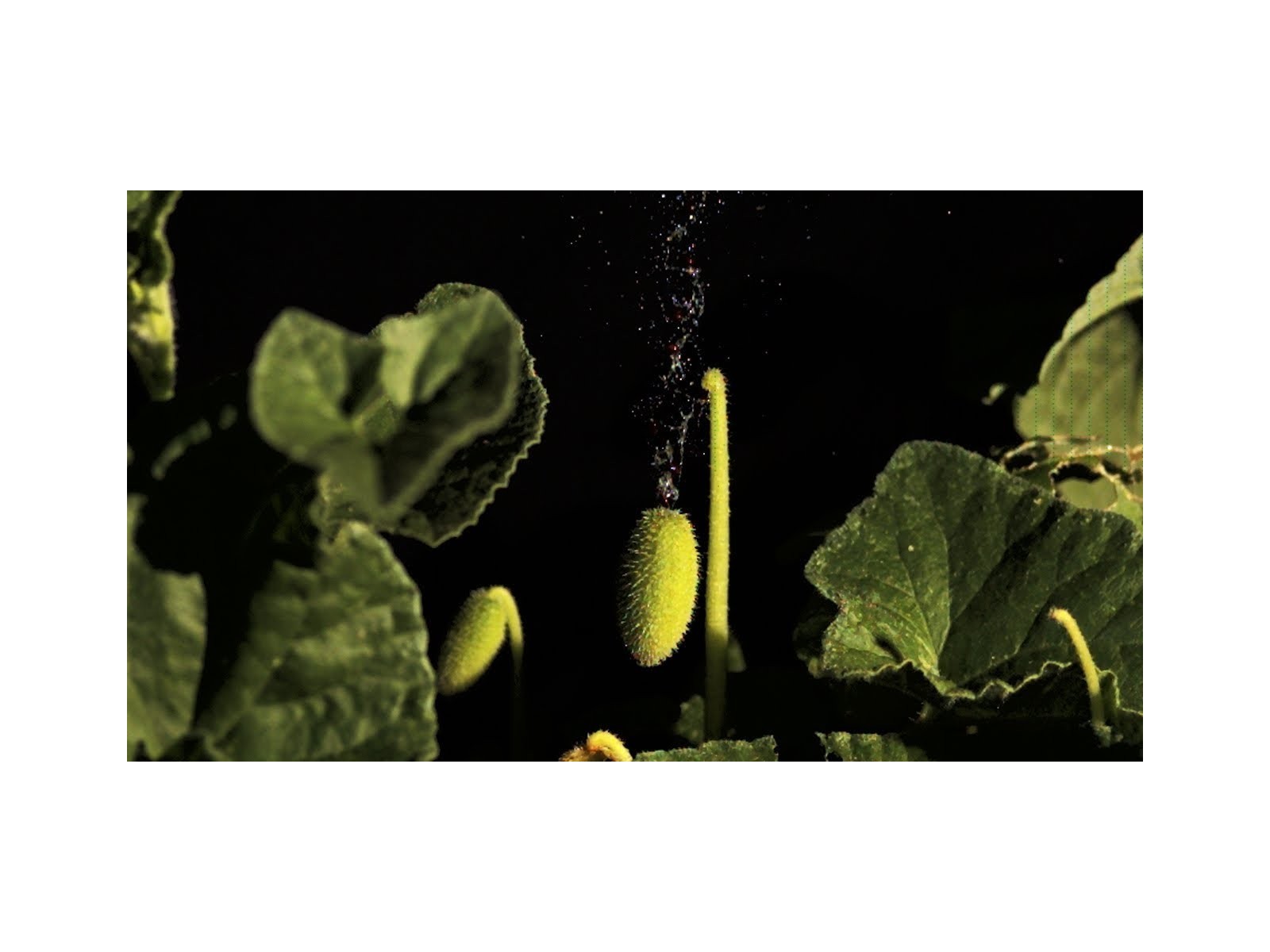 The bite strength of a crocodile is about 18kN. Making some big assumptions that a biological cannon is engineered, and assuming engineering can beat nature by about 4:1, you could create 3 m (9 ft) barrel that pitches or spits the cannon ball at the desired velocity. The energy requirement is between 40 and 60 kcal per throw, which is not unreasonable (a can of soda contains about 200 kcal). You could make the barrel as compact as 2 m (6 ft) by choosing the slower velocity. The governing equation is : v = sqrt( 2 s a )

As mentioned in other posts, it is possible to imagine an engineered organism treating glycerin with nitric and sulfuric acid to produce a meta-stable TNT, or other explosive chemicals. The pressure that the combustion chamber has to endure depends, again, on the muzzle length and ranges from 12 MPa for a 3-meter barrel to 52MPa for a 1-meter barrel and the higher muzzle velocity. According to Wikipedia, pine at 40 MPa could handle the lower range. There is also the possibility, if engineered organisms are a possibility, of naturally produced nylon (which can stand much higher tension) keeping the chamber together. There would have to be some sort of biological slide action allowing the propellant into the chamber, then sliding closed to protect those components from the combustion. A "tired" organism might misfire fantastically. From your link, I found the cannon ball diameter of 3 inches. The equation involved is P = F / A

Alternatively, the cannon ball might have a small plug of conductive metal on it that the engineered organism could vaporize with a high current and conduct out of the chamber. The barrel pressures involved would be unchanged. Voltage isn't a problem here - electric eels (860 V) generate much more voltage than a rail gun might require (20 V). Power (P = V I) is a concern, but you might be able to handwave it. Neurons (the source of the electrical power) take between 1/200ths of a second to a little under a second to recover between firings.

A Note to Consider

Because of this, you may prefer long, spin-stabilized cannon balls and long barrels.

Well, you can follow the idea from Warhammer 40k Tyranids: They are a countless swarm of creatures that devours everything remotely organic, leaving on their trail only barren planets. The hive mind that controls them adapts the weapons the Tyranids use to match the situation. 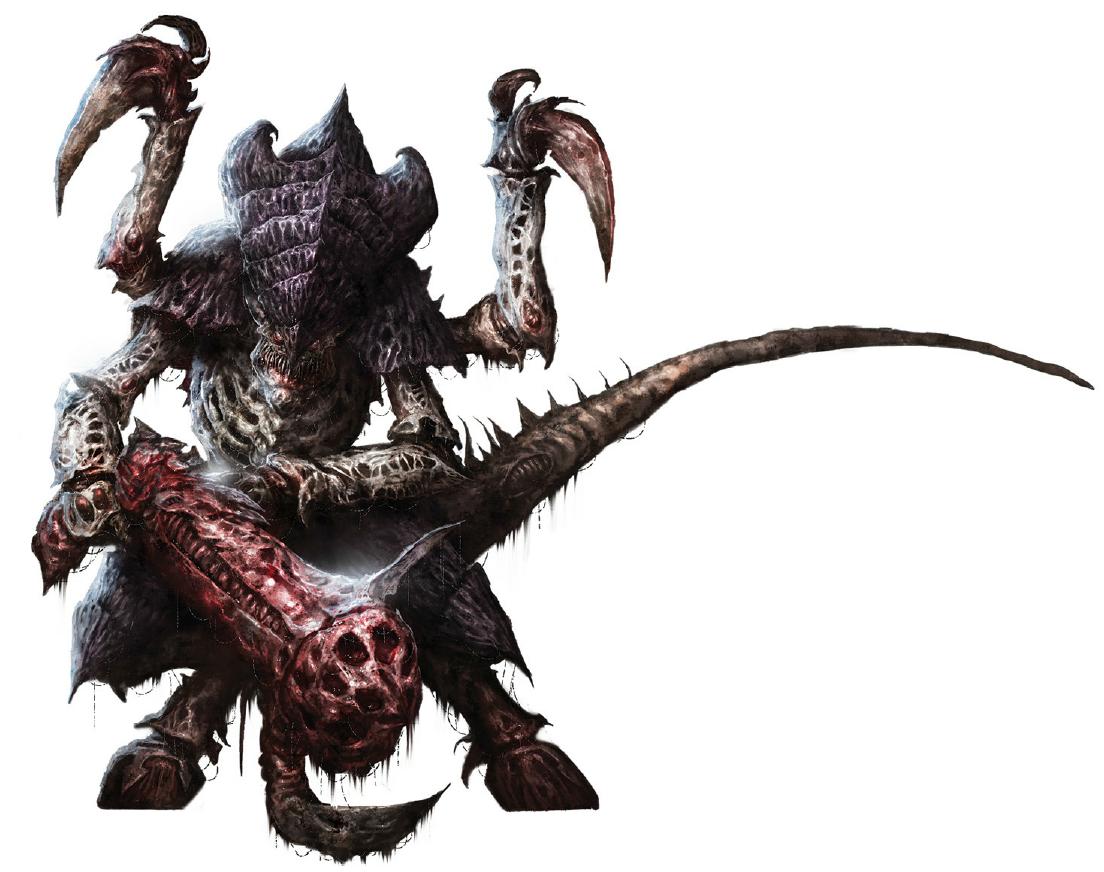 One of the most iconic weapon is the Fleshborer:

The Fleshborer, designated by the binomial Pulpa terebro, contains a compact brood nest where Borer beetles lay their eggs, which hatch and mature, sustained by the weapon for future use as ammunition. These beetles are kept in their mature state in a hormone-induced dormancy until the weapon is ready to be fired. At this point, neural impulses from the wielder forces one of the insects into a firing sphincter. From here, the beetle can be fired at a target by a further impulse.

The beetles move very little until the weapon is triggered by a massive electro-chemical shock which drives the beetle into sudden frenzied action. Using their powerful flea-like legs they launch themselves out of the weapon at tremendous speed. The beetle itself is blind, having been specifically bio-engineered this way to lessen any possible deviation its flight path. On striking they expend their life energy in a matter of seconds, boring frenziedly through the target's armour, flesh and bone. If however the beetle fails to find a target, or hits something that even in its frenzied state it cannot bore through, it quickly dies regardless. The beetles secrete a potent digestive enzyme upon impact with a target, aiding the penetration of armour and flesh. http://wh40k.lexicanum.com/wiki/Fleshborer

Now you can create a similar mechanism by itself: an insect colony would create a gun-like cocoon with semi-mature but dormant insects. Now when your user shoots the gun, the insects kill the prey gorging themselves on food. Now, the smart user can leave enough of the carcass to be turned into new gun-colony.

Very simple, just have a giant Elder Dragon put a 2kg rock in his mouth and spit it out as fast as he can.

As a bonus you'll get a fireball.

Not the answer you're looking for? Browse other questions tagged science-based biology weapons or ask your own question.

34
Could plants spread their seed to other planets?
6
Can hydrochloric acid and digestive enzymes cause a fire?
5
Limits of energy generation in mixing animal and plant by-products or storage

12
How could a biological loudspeaker work and naturally evolve?
33
How effective would a stone cannon be?
4
How could medieval fantasy alternative to a cannon work without magic or gunpowder?
25
Would this biological cooling system work?
9
Biological healer, how does it work?
8
Would a magic-using society create living batteries?
4
How would Roadhog’s Scrapgun work?