Context: my protagonist is a single woman travelling on horseback with an all-male company, from whom she has reason to fear violence and would be strongly resistant to sharing sleeping quarters with them. They'll be on the road for a period of several weeks, and can't expect to reach an inn or a town every night. It's early spring in a temperate climate where rain is normal, so sleeping under the stars isn't really feasible.

Edited to clarify: she fears violence but doesn't have a choice about travelling with them, and isn't actually going to come under threat - of the six of them, two would actively defend her and only one wishes her harm, but can't act on said wish. I promise it makes sense in the story!

I wonder if it would be sensical in a medieval-ish fantasy setting for her to have her own small tent rather than have to bunk with them or sleep under the stars. I know that it's possible in the modern day to have a tent sized just for one person, of course, and given the limitations the setting puts on tech this tent might be sized for two people, I just wonder what such a thing would look like in the first place/how it would be constructed.

Can anyone speak to whether such a thing was/would be possible (especially something that would be portable on horseback), and if so what it might look like? I'm feeling a little unsure about arbitrarily sticking the detail in, and have been having trouble with the research myself. If you think it wouldn't make sense, any other suggestions as to how to deal with the situation, other than "she'll just have to share"?

Yes, tents for one were usual since Roman times. They were made with big pieces of waxed wool-cloth and they could be transported folded: 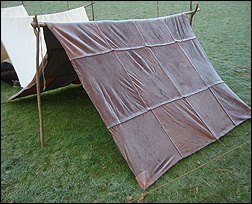 She can bring the sticks too and assemble it in a few minutes or get them on the road.

If your company expects to be several days on the road, they are bringing spare horses that carry a lot of food (big horses need more than just grass), water, blankets, spades, ropes...

She, adding her personal tent isn't a big deal. Some blankets can make it more intimate.

If you mean violence as in rape, I would suggest she can tie herself into a kind of very loose sleeping bag blanket with her hands and arms free inside, with daggers. She can ensure her sleeping companions know it, and will wake in time to stab anybody trying to unlace her or cut through her blanket. Of course they might try to knock her out first!

Another idea is to just wear a poncho (again with daggers at the ready) and a very wide hat to protect the head from rain. The private tent (although historically accurate) is a bad idea, it prevents her from seeing others gather or approach.

I would see if she might be able to arrange ropes or netting up in a tree so she can sleep in it without worrying about falling out, again with a hat and waxed blanket to stay dry, and a dagger for self defense. On the ground she can be grappled and pinned or knocked out, I don't think men will try something twenty feet up in the air where a push or a slip might be lethal, and she could plausibly hear them coming and wake up.

If she knows how to build a lean-to, or something as simple as that, she could pehaps sleep, albeit uneasy. If she has no skills in campcraft, it would probably not be a good trip for her. I imagine she would have to bunk with the man she trusted the most, and have a knife at the ready. Either way, it should make for great suspense.

Tents of all sizes and descriptions have been around for a long time. 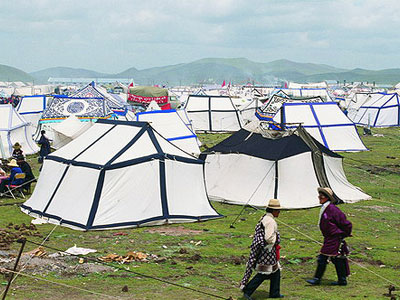 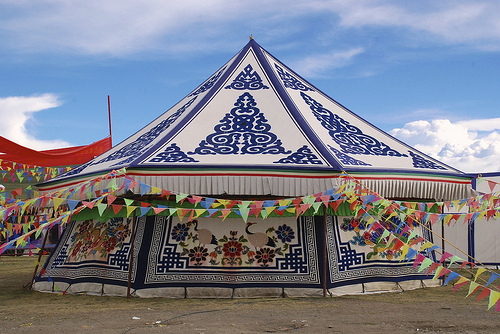 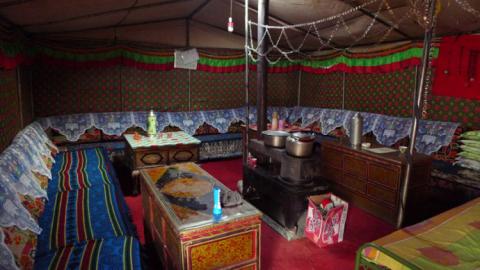 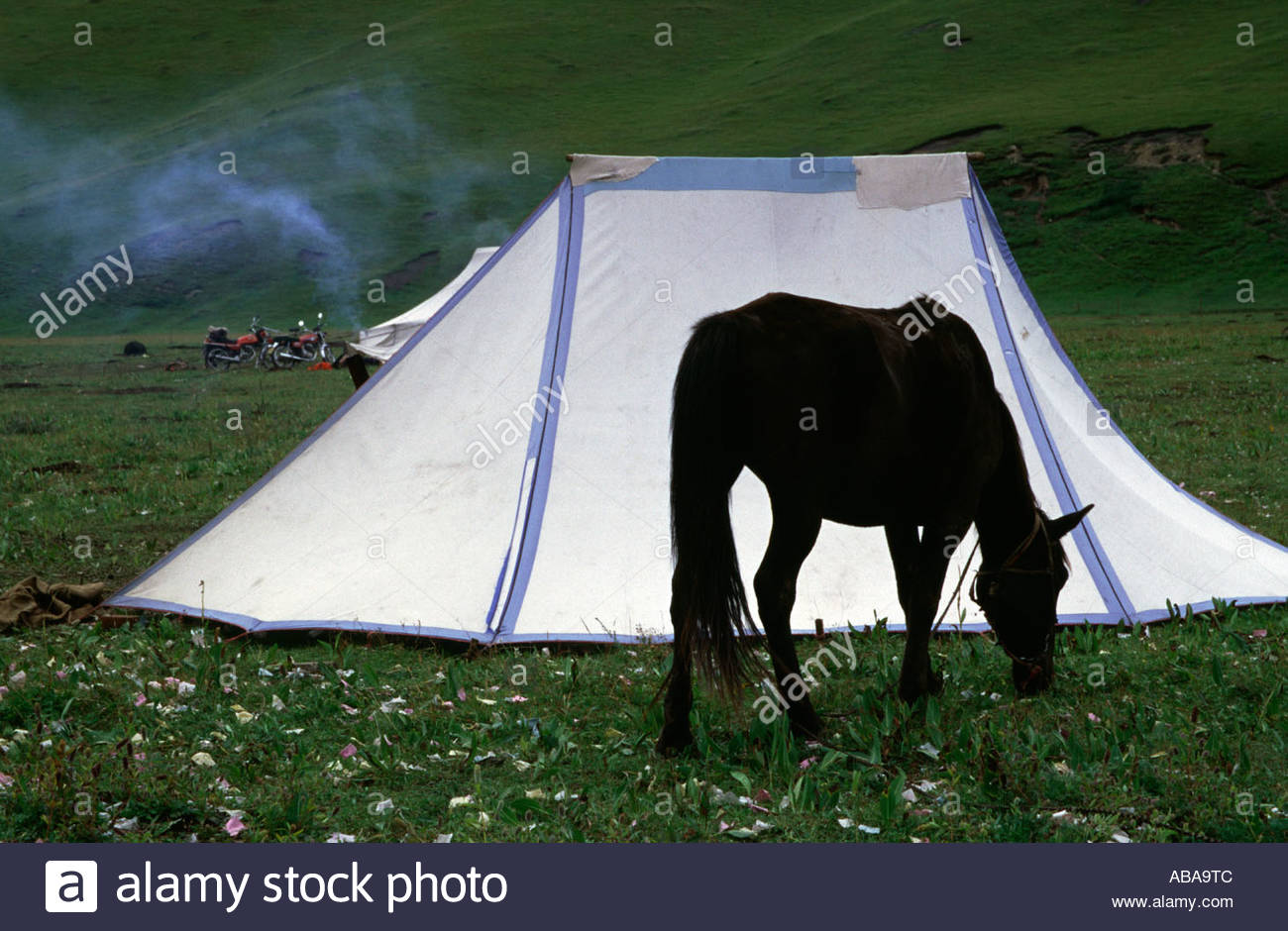 A tent can be poleless (just canvas as rope), the canvas being stretched across a natural depression or between trees, or could rely on a single or two posts (all of which could fit on a horse).

A one person tent is normally more than half the mass of a two person tent (something like a square/cube law). If you are set on traveling light bigger tents make sense. Generally also about as much trouble to erect and take down as a two person which can be extra bothersome if the user is less experienced or has no one to hold the other end of stuff.

A one person tent is generally less comfortable than a two person tent. If you are fighting the environment it probably makes sense to work together. Normally stoves don't fit in personal sized tents either which is a big factor if cold is a problem. Height is very helpful in keeping a tent cool, but tall tents with a small footprint are nearly as bulky as tall tents with a large footprint, and might be obnoxious to set up especially if there is any wind.

Tents are not armor. If something bigger than an insect is interested at getting inside it probably can. Against a serious threat tents are worse than sleeping under the stars, because they limit your senses and mobility. They might offer a moment warning as an attacker rips through it, but that isn't any better than setting tripwires or scattering dry twigs to snap under approaching feet.

If there is no need to make a defensible camp sleeping away from the others might be a better choice, it can be very hard to find a sleeping person (who doesn't snore) at night if you only have a vague idea where they are. In any kind of brush or not flat terrain you might walk within a few feet of a bivouac without noticing it. If she walks 100 meters from camp before laying down several men might search most of the night without finding her.

Not the answer you're looking for? Browse other questions tagged technology medieval travel medieval-europe or ask your own question.

88
Possible distance travelled by horse over 6 weeks?
10
Handling a Dream-Invader Prisoner
30
Creating a realistic timekeeping system for a fantasy world
21
For a head of a palace guard (staying mainly inside the palace), is an estoc a realistic weapon of choice?
31
How far can you travel on horseback while pushing the horse to the brink?
30
What city and town structures are important in a low fantasy medieval world?
2
Would it be realistic for horses (whether naturally or from man) to make their way south to post apocalyptic New Orleans?
18
What kind of materials could be made with immense heat, that weren't available in a typical Medieval setting?
13
Why does my character have such a good sense of direction?