What would cause a region of land to become barren over several decades?

I have a region in my novel called the Burren where some event many years prior caused the once relatively lush hills of farmland to become a barren desert.

The desert expands little by little every few years.

The desolation was initially caused by magic, but my magic system is tied into the chemistry and physics of whatever happens. So what would cause rolling hills of green to turn into desert?

There are no forests in this area if that changes anything.

Cut down trees + monsoon = no soil

This happened in Ethiopia, from around ~600 AD to 800 AD. Ethiopia is a giant volcanic plug sticking up two kilometers from the African Savanna. Because of its height and position right at the edge of the tropics, it had an excellent combination of stable year round temperatures, cold enough nights to prevent tropical diseases from spreading (malaria was minimal and tsetse flies non-existant), and stong, albeit seasonal, rainfall.

This meant two things: not only did Ethiopia have its own set of native crops, it was also to import and grow a wide variety of crops from other places. Ethiopia initially thrived. The hills were covered in forests, so there was plentiful wood, rich volcanic soil, and lots of lakes and rivers from rainfall. This is one of the few patches of Harenna forest remaining in Ethiopia. 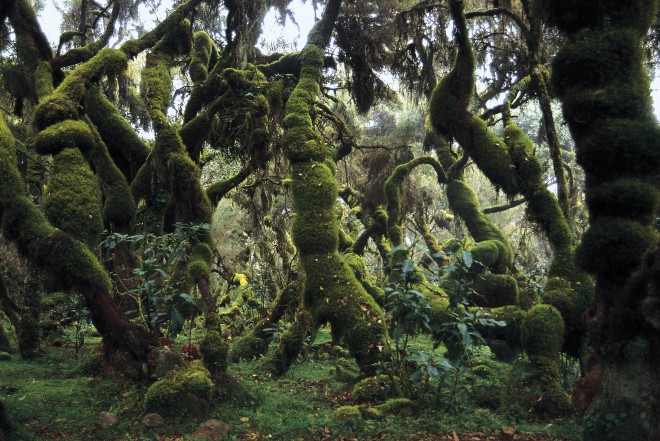 The Axumite empire flourished in the 4th to 6th centuries. In the time before Islam, it was considered one of the great powers of the near East, rivaling Persia. Axumite armies expelled the Persians from modern day Yemen in 525 AD.

But things went wrong (and this is covered in Jared Diamond's Collapse). They cleared their mountainous home of trees to expand farmland and population. Ethiopia has a monsoon-like climate. Addis Abebe recieves about 1200 mm of rain each year, roughly the same as New York City, but 50% of the rain falls in just 2 months. Addis Abeba sees more rain in July and August than London, San Francisco, or Beijing see all year. in other words, a monsoon climate.

Denuded of tree cover, the heavy summer rains washed the available topsoil away. The rich volcanic soil that had built up over 30 million years was eroded away, leaving scrubby brush and barren ground. The change happened relatively quickly. Trees along riverbanks were the last to be cut, since riverbanks aren't great places to farm. But once you decide to cut those trees to fire your forge or cooking fire, erosion proceeds rapidly. From the apex of power in the late 6th century, the Axumites had fallen so far that their capital was practically abandoned less than 50 years later. 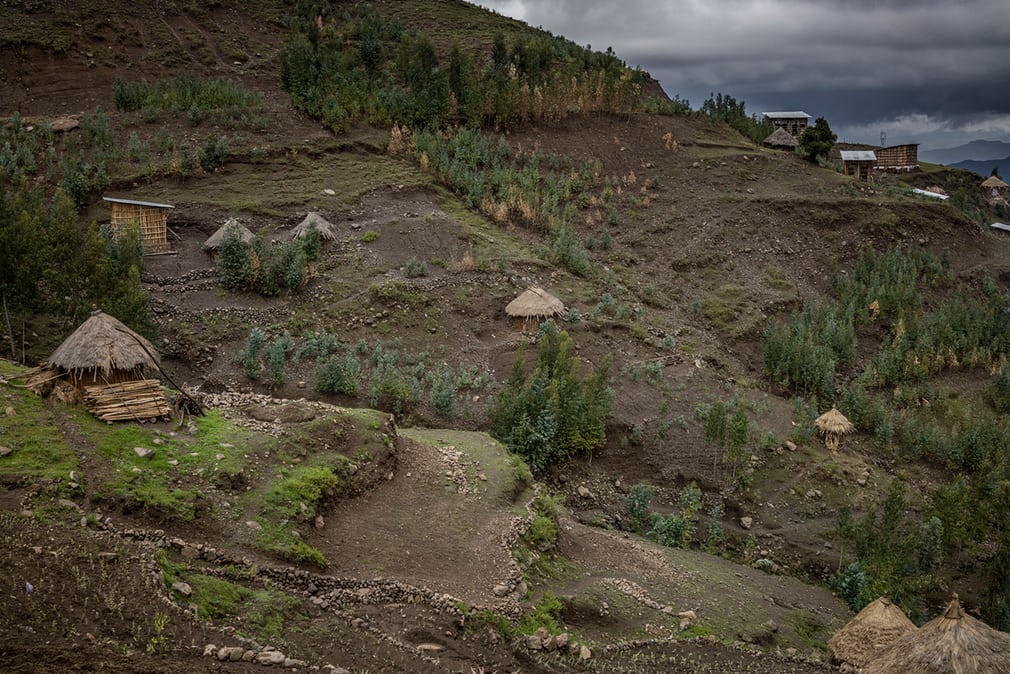 Ethiopian civilization did not die, of course. It continues to the present day, with almost 100 million people still living on the plateau. But the fertile ground that had propelled the Ethiopians to imperial ambitions was relegated to the dustbin of history.

An increase in soil salinity could lead to plant death and desertification, they didn't say "Salt the Earth" for nothing, it works!

The right amount wouldn't immediately kill all the plants, but would weaken them, killing them over a period of years. Eventually nothing grows and the topsoil blows away into a dust storm.

Bonus, this doesn't require the area to be dry like a desert, it will kill plant life even in relatively wet areas.

Also if your initial salt magic spell event was big enough, the salt would spread, first through water runoff, and then through the blown dust, spreading the salt and expanding the region of desolation.

The Island of Nauru is not far off being an example of this. Once, it had some of the most fertile soil on Earth. But they mined all of the phosphate from the soil, and it became very barren. They were once the greenest and richest place in the world (per capita), but became one of the most barren and poor.

That might be an interesting cause for your soils' change for your story. The magicians sap all the phosphate out of the soil, or summon imps to steal it away to hell.

After that, simple desertification as Ebonair describes may be enough.

Sounds like desertification, where deserts slowly grow larger as the surrounding area dries and the soil degrades.

The immediate cause is the loss of most vegetation. This is driven by a number of factors, alone or in combination, such as drought, climatic shifts, tillage for agriculture, overgrazing and deforestation for fuel or construction materials. Vegetation plays a major role in determining the biological composition of the soil. Studies have shown that, in many environments, the rate of erosion and runoff decreases exponentially with increased vegetation cover.[32] Unprotected, dry soil surfaces blow away with the wind or are washed away by flash floods, leaving infertile lower soil layers that bake in the sun and become an unproductive hardpan.

The lack of trees definitely plays a big part:

The Gobi Desert is expanding at an alarming rate, in a process known as desertification. The expansion is particularly rapid on the southern edge into China, which has seen 3,600 km2 (1,390 sq mi) of grassland overtaken every year by the Gobi Desert. Dust storms, which used to occur regularly in China, have increased in frequency in the past 20 years, mainly due to desertification. They have caused further damage to China's agriculture economy.

The expansion of the Gobi is attributed mostly to human activities, notably deforestation, overgrazing, and depletion of water resources. China has tried various plans to slow the expansion of the desert, which have met with some small degree of success, but no major effects. The most recent plan involves the planting of the Green Wall of China, a huge ring of newly planted forests; the government hopes the forests will help stabilize the soil, retain moisture, and act as a buffer against further desertification.

So the initial event that created a small desert killed off a bunch of vegetation, similar to the effect of severe overgrazing and logging, and set a feedback loop in motion where the soil degradation is now spreading outwards.

A magma intrusion in the form of a laccolith causing toxic gasses to taint ground water and percolate up through the soil could kill off plant life, and it would explain why it spreads outward. The surface would also begin to rise around the surrounding area, exposing it to winds that would help spread sand.

The simple introduction of an invasive species (think hordes of grasshoppers), a previously unknown soil fungus (eating away at roots) or a mutation in soil bacteria that produce large quantities of acidic wastes. One or all could easily do the job.

Cleverness and a feedback loop.

You have it backwards: the magic kills all the plant life in the area in the short term, and maybe keeps anything new from sprouting for a short while. But without root systems to hold the soil together, the same winds that helped make the land fertile in the first place strip away the topsoil leaving desert behind. (AKA the dust bowl.)

The local people unwittingly do the rest, as they move out of the barren land and settle in what is left. Through both normal human laziness and lack of resources, they only travel as far as they have to. The land can't support this larger number of people and as they overtax the soil and water they create more desert. Now they and even more people have to move again, expanding and repeating the effect. Livestock and over-farming are both major causes of desertification, and a feedback loop agriculture desertification like this can be seen in places like the Sahara and Patagonia.

Quite a nice return on investment from the spell caster's point of view.

Have your region rely on a single, major river for its water supply. Perhaps it's sitting in an alluvial fan where the incoming river splits into dozens of streams that criss-cross the land in a natural irrigation network. Diverting the river's course somewhere upstream would cause the region to dry out, slowly killing off plants, driving away wildlife, and fueling the desertification cycle.

You can make the cause for this as magical or mundane as you want. Something as "magic" as a well-placed canal, natural erosion/meandering, or a natural dam (perhaps from a landslide) could be enough to coax the river to take a new route and bypass your now-barren region. Your character could trigger such a process (or artificially accelerate it) via magic, or it could be completely natural and they simply claim they did it through magic.

Magically put some sand over there. And/or lover the level of water

Just like we (humans) did to Pustynia Błędowska Wikipedia page

You can of course just poison the water for short time and kill everything that need it to live. Then the terrain turn into barrens and the poison stored in the dead plants and animals is spread by the wind, expanding the non-habital territory.

Basically, soil has trillions of microorganism who digest leaves and everything that falls into the earth. So in an event where the microorganisms die, like wildfire, the soil will degrade and will be barren over time.

Second is what Mr.Viktor Schauberger called half recycling: The Secrets of Water, The Documentary of Viktor Schauberger "Comprehend and Copy Nature", in which soil loses its overall power to absorb water due to extreme heat

Not the answer you're looking for? Browse other questions tagged science-based magic environment deserts or ask your own question.

4
Preparing human colonists for a desert planet with a red giant
33
If a patch of desert were magically displaced to the middle of a forest, what would happen to the whole forest after certain periods of time?
6
What happens to plants when the temperature increases a lot in a couple of years?
11
What would be the condition of a wood cottage that has been abandoned for ~20 years?
6
Foraging behavior of a forest slime
14
Why would a medieval civilization leave newly discovered land undeveloped?