The Ahuizotl is a creature from Aztec mythology. It is aquatic, and appears similar to a small dog with grasping forepaws like a raccoon or monkey's, and a very long tail ending with an extra hand. It is capable of mimicking the cries of a human being, holding an adult human down in the water till the human drowns, and eating (and presumably digesting) human nails, eyes and teeth. How close could a world-builder realistically get to a creature with these attributes that could evolve naturally? In particular, what evolutionary pressures and niches could lead to evolving such traits?

Assuming we're talking about evolution from conventional Earth vertebrates rather than alien imports etc., and that it's native to the region of Mexico inhabited by the Aztec Empire:

It is aquatic, and appears similar to a small dog with grasping forepaws like a raccoon or monkey's,

This sounds like it might actually be a member of the raccoon family; their heads are rather dog-like already, and the approximate size is about right.

tail ending with an extra hand

An actual, fully articulated hand (with all the normal bones, etc.) seems very unlikely - tetrapods (non-fish vertebrates) are pretty strongly constrained to no more than four limbs. However, there are two possibilities that could give the same effect:

capable of mimicking the cries of a human being

Assuming this just means crying sounds rather than articulate calls for help, that doesn't seem terribly difficult. It doesn't necessarily have to be learned mimicry (like a mockingbird), the call might just be similar-sounding.

The best bet would be it only hunting humans and similarly large prey around well-anchored or very heavy underwater logs, etc. it can cling to - if the ahuizotl isn't holding on to something, a human could walk off with it. The animal would have to be extremely strong and resilient to deal with the strain of holding on to a struggling human who's probably 6-8 times its mass, but it's probably less crazy than the hero shrew's apparent ability to survive a human nearly 1,000 times its mass standing on it! https://en.wikipedia.org/wiki/Hero_shrew

If it eats only this part of the person (not the flesh), that suggests that humans aren't its main prey (which would then suggest that the "crying" sound is probably evolved for some purpose other than luring humans - it might be simply coincidental, or mimicking the distress cry of some other animal).

Probably it is either looking for some specific nutrient (although teeth are largely calcium phosphate while nails are protein, so they wouldn't likely have the same nutrient) or it is not actually swallowing the nails and teeth, but carrying them in its mouth to decorate its nest/burrow/whatever?

The eyes might simply be opportunistic feeding on the softest parts of the body... maybe it also takes the tongue, etc.?

An aquatic creature like a small dog makes me immediately think of the pinnipeds- seals and walruses. They're a little big to be small-dog-like, the smallest seals being around a meter long, but that's nothing a little evolution can't handle. At least pinnipeds have fur, unlike cetaceans. As an added bonus, they're in the dog-like half of the order Carnivora (as opposed to the cat-like half), although they're more closely related to bears, weasels, and raccoons than dogs.

Seals have streamlined bodies and flippers, which is a step away from the ahuizotl's grasping forepaws. However, they could be an intermediate evolutionary step. Perhaps a population of raccoons found evolutionary pressure to take to the water and quickly evolved waterproof, seal-like fur, but have yet to lose their dextrous paws.

A very long tail is easy; many carnivorans already have those (although no existing pinnipeds seem to). An extra hand at the end of it is much harder. There's really no reason I can think of for such a thing to evolve. Some animals, such as New World monkeys, already have prehensile tails, with which they can grasp things by wrapping their tails around them. This works well enough, so there's little evolutionary pressure for any more sophisticated hand to evolve and quite a bit of pressure for it not to. Hands are darn complex, and vertebrate tails have exactly none of the support structure required to make them work. Perhaps the ahuizotl has a simple prehensile tail, and the "extra hand" bit is nothing more than a myth. I'll get back to this in a minute.

Mimicking human cries is easy enough. Just gotta have vocal chords that are the right shape. It's not likely that these things would evolve specifically to sound like humans, so we'll write this one off as a coincidence like how some hyena calls sound like human laughter.

Drowning adult humans is... hard. Unless they're already incapacitated. Or drunk. Or can't swim. I am reminded of the evil carp of Dwarf Fortress, which were famous for their ability to provoke unsuspecting dwarves into leaping into rivers to their doom. Most humans, however, aren't stupid enough to leap into a river at the sight of something in the water lashing out at them. Especially if they can't swim.

Anyway, this is where the prehensile tail comes back in. Maybe, instead of simply trying to drown humans, the ahuizotl simultaneously drowns and strangles its prey. The ahuizotl tricks unfortunate humans into falling into deep water, perhaps by grabbing at their feet and tripping them, then wraps its long, prehensile tail around the human's neck. The combination of suddenly being dumped into cold water and having a wet tail cinching down around your neck could well lead to panic and drowning in short order, especially if the victim can't swim. This could even contribute to the "extra hand" myth- to a terrified observer, this could well look like the ahuizotl was wrapping its hands around the victim's neck, much as one human would strangle another.

Selectively eating, digesting, and getting something out of human eyes, nails, and teeth is... weird. Maybe there's some nutrient in those parts that the ahuizotl can't get any other way. But nails are just keratin, a protein found in larger quantities and in a much more accessible form in skin. And teeth are darn near impervious to all kinds of things. Maybe they need to harvest the special photoreceptor proteins from human retinas for some reason. Or maybe human teeth just make good gizzard stones? A bit far-fetched, since I'm having these thing evolve from mammals with their own teeth, but I'm running out of ideas here.

You are basically describing a giant river otter. 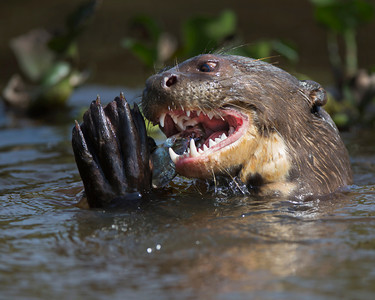 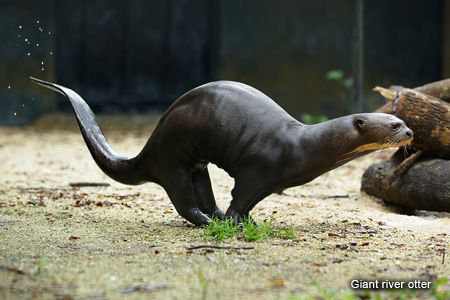 They are big. They are smart. They play. Their faces are human enough to be creepy. They have long tails. They have grasping hands. Given that they eat entire fish, bones, fins scales and all they would have no problem with the hard bits of a human. As regards holding a person underwater these otters are big - 6 feet long and strong swimmers with claws and teeth to hold on. I think it sounds likely they could hold a person underwater.

The only thing they do not have is a hand at the end of their tail.

I give you Drepanosaurus and megalancosaurus the weirdest damn reptiles I have ever seen. The whole group basically has a finger and claw at the end of its tail. We suspect it was for added grip while climbing, but honestly their tails are so weird it is little more than guesswork. 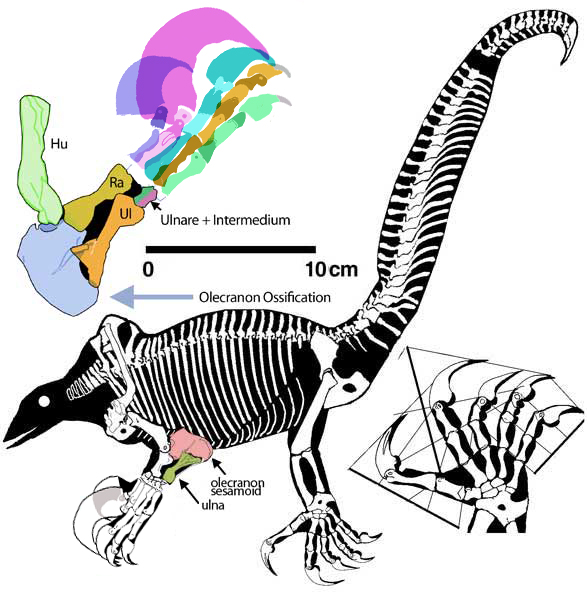 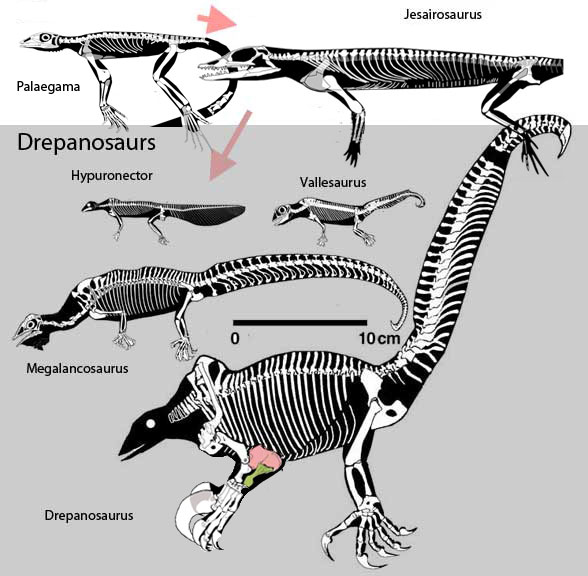 As for digesting nails, teeth, and hair crocodiles can do that, just by combining gastroliths and very strong stomach acid. Presumably your creatures eat everything else as well because the calories available in just those pieces are negligible.

Those weird forearms and huge claws give them the grip of an animal several times their size, although people are still trying to figure out why.
Their evolutionary history has had them getting bigger and bigger so it is not unreasonable for them to eventually get as big as you need.

Ahuizotl could have evolved from a starfish. A mutation may have caused the starfish to lose its brachiolarial arms, causing them to be unable to stick to the sea-floor. This may allow them to evolve to crawl along the sea-floor as they develop. The brachiolaria might be better at survival, and so it may last longer, with the adult body then shrinking to avoid it weighing the larva down. To protect itself, it may gain tough, rubbery skin, and spines on its larval body. To further protect the body, they may produce bone-like structures throughout the larval body, which would not only defend against crushing, but would also make them more able to escape from predators. Some of the spines on the frontal limbs may be used to catch and pull apart prey. This may lead to these limbs fusing into a jaw beneath the head. Due to these limbs not being used for locomotion, the rear limbs may move forwards to allow them to turn their front more easily. They may also adapt some foot-spines into claws. A mutation may lead to them developing small, soft spines. These spines may be used to detect vibrations, and so might end up staying on the head as sensory organs. These sensors may split into different areas, and extend as triangular antennae, which would allow them to sense the direction of vibrations better. This vibration sensing may also lead to the development of some sort of ear cavity under the antenna. This may lead to the adult gut producing sounds to try and find mates. To increase the range of the calls, the sound producing organs might increase in size, leading to the tail extending into a long structure. These creatures may start to practise parental care, and build nests. To do this, they may become able to move their head more, and evolve a neck. They may also use the front 2 pairs of limbs to grab stuff, leading to them fusing into a chela, which may form into something resembling a raccoon's hand. They may also develop the adult arms into clinging digits to drag materials to the nest. Due to the increased effort put into mating, they may evolve display structures, such as dark skin and bright eyespots. They may also use the hard parts of animals as gifts, to prove hunting skill. They might move into shallower waters. They may become like crocodiles, but may also mimic the sounds of their prey to attract the prey. These creatures would likely have lots of food to eat, and could grow to large sizes. These changes would lead to a creature like the Ahuizotl

The ahuizotl actually is a 4-foot long and ferocious opossum. You might ask ''But what about the hand on the tail?" As the ahuizotl wrapped it's tail around the victim, an onlooker might think that the opossum wrapping it's hand around the victim. As for the crying, it would be to lure more victims. It would carry the eyes, nails, and teeth in it's mouth so it could use them as decorations. It would then eat the carcass in it's lair. This would be an anatomically correct ahuizotl.