Can my character have a pet mammoth?

I have been working on a post-apocalyptic fiction story and there is one thing I have been wondering about, could (in theory) a mammoth make a good pet and transportation system in this story?

For some context, my character is a human, genetically altered to have thick organic armored plates around his body and he has been exploring the habitable northern area because most of the south, equator, and southern area of the north is laid to waste by radiation from the war. Before his time, mammoths have been successfully revived and released into the wild, so they are in the north.

My character uses his personal pet mammoth to carry his gear so he can set up camp anywhere, and in exchange for this the mammoth gets companionship, food, water, and protection. The northern polar area gets at the average coldest 0˚F and warmest 57˚F (−18° to +14° C). There are about 800 humans in this region and 1200 woolly mammoths.

Could someone tame a woolly mammoth, or would it just turn out bad? If so, what other arctic beasts of burden could I use?

There is good chance you could tame a mammoth

The good news is that Asian elephants are domesticated, or at the very least tamed. If the woolly mammoth has the same temperament as an Asian elephant it is totally believable that the mammoth could be a pet, mount, and even companion. Elephants are pretty smart and sociable.

On the other hand, close genetic proximity does not mean that an animal is domesticable. Horses are domesticated, and so are the closely related African asses, but not the closely related zebras and Asiatic asses (onagers). All these species are in the same genus, and all have the same interbreeding capability (i.e. non-fertile offspring like mules), yet their domesticability is apparently variable.

All told, I rate this proposal as 'plausible'

Domesticating real ancient mammoths would be iffy. Supposedly African elephants cannot be domesticated: too fierce. Even though he was African, Hannibal used Asian elephants as his war elephants.

But for your mammoths I say they could be domesticated. Here is why.

1: These new mammoths will be nice. Why would anyone bring back mammoths? Because they hoped to make money. A good way to make money off an animal is to have humans interact with it in some way - ride it, pet it, have it do work. You do not want a fierce or unpredictable animal in this role. So: the mammoths brought back would already be engineered (for example, genes from long domesticated Asian elephants) to be docile and receive humans well. Dogs for example come from a long line of domesticated canids, and even wild dogs are ready to be domesticated again - usually. Dingoes are an exception: they have lost whatever dogs have that let them be domesticated and so even though puppy dingos are nice, the grown ones are irrevocably wild. 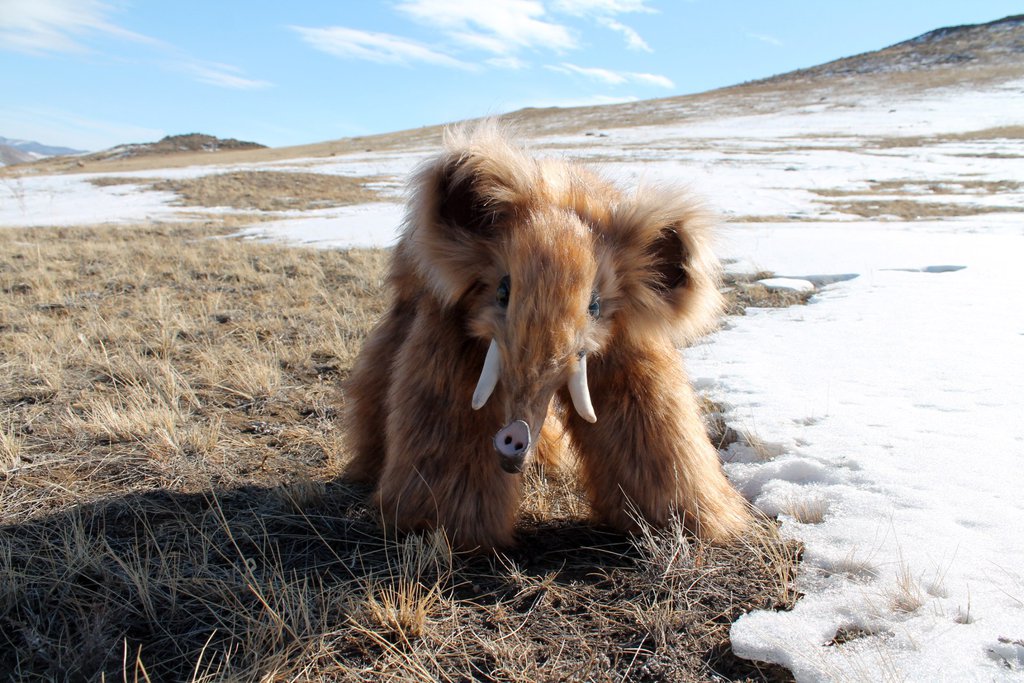 https://goodden.deviantart.com/art/Handmade-poseable-baby-wooly-mammoth-521851526. This person has the cutest baby animals on her site!

It's possible, but likely only if your character encountered the mammoth as a baby/young mammoth and raised it from there. Domestication is generally a species-wide thing that spans generations, so unless a mass mammoth-taming project had previously been undertaken in your world, mammoths as a species would not be domestic and it would be extremely difficult to tame a grown mammoth. (info from a general knowledge of domestication and fact-checking with Wikipedia and other sources)

I assert that theoretically any pack animal can be tamed

The single common trait across all domesticated or tamed species is the pack/family behavioral trait.

In order to have familial structures like that simply of lions an organism must be behaviorally wired to facilitate subservience to a commanding presence (an alpha). It is this behavioral wiring that humans can take advantage of in order to assert themselves as the alpha in that organisms perspective.

This is why in my assertion that alligators cant be tamed because they don't have any such behavioral constructs. However there are extremely rare cases where taming has occurred in these cases it is likely the human managed to supplant the parent-child bond or mate-mate bond that alligators can sometimes demonstrate.

Some barriers to this outlook is communication. Like ants if you cant supplement the queens commands you cant control the ants. And an individual ant lacks the thought processing facsimiles to be reasoned with.

Not the answer you're looking for? Browse other questions tagged science-based internal-consistency biology science-fiction .

28
Hallway cannon, the last way out
6
Does this apocalypse and the following events make sense?
8
What would it take to create insulin in the post-apocalypse?
3
Does or could a collection of regions like this exist on Earth?
4
Preserving information for future humans
1
How would someone talk to animals (without technology or magic)
15
How would a secret tunnel be kept entirely secret?